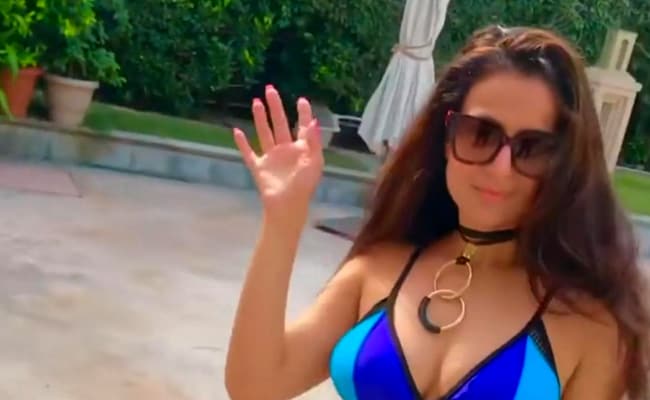 Actress Ameesha Patel, who came into the limelight with the film ‘Kaho Na Pyaar Hai’, released in the year 2000, may be away from films, but she continues to create a ruckus on social media with her killer acts. Recently, Amisha has shared a video of her on Instagram, in which she is looking very glamorous. This video of Ameesha is becoming increasingly viral. In this video, Amisha is doing a stylish walk wearing a bikini. Fans are fiercely liking and commenting on this video of ‘Gadar Girl’.

This video, which is becoming increasingly viral on social media, has been shared by Amisha with the caption ‘Delhi’. In this video, Amisha is wearing a blue color bikini. She is seen walking stylishly wearing black glasses on her eyes. This video of Ameesha has been viewed more than four lakh times so far and this process is still not stopped. Seeing this avatar of the actress, fans are also commenting like ‘Uff’ and ‘Sakina I love you’. Amisha Patel is followed by 3.8 million people on Instagram.

Amisha Patel had earlier shared some of her photos in a black bikini, which became very viral on the internet. On the other hand, if we talk about Amisha Patel’s work front, then she was seen sharing the screen with Sunny Deol in the film ‘Gadar’ released in 2001. This film of Sunny and Ameesha earned a lot at the box office. After a long gap, Ameesha was seen in the film ‘Bhool Bhulaiyaa’ opposite Akshay Kumar.

Kangana Ranaut, who departed from Mumbai with a heavy heart, said,...