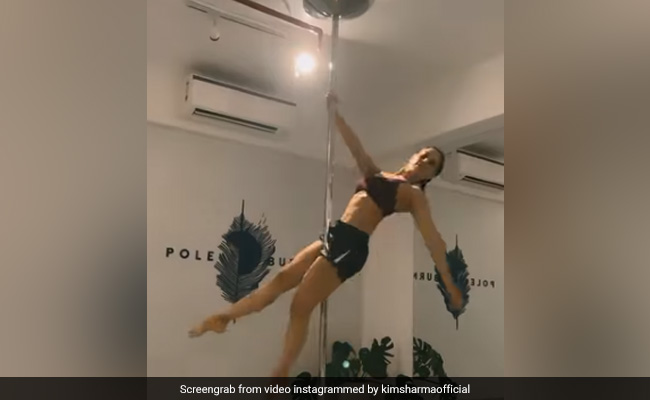 Bollywood’s well-known actress Kim Sharma may be away from films these days, but she often makes her presence known on social media through fitness and dance videos. Kim Sharma has again shared a video of herself on Friday, in which she is seen doing pole dance with ease. Kim Sharma’s best fitness can be gauged by watching the video. Florida’s Just Once song is playing in the background of the video. Posting the video, the actress thought it better not to write any caption. (Watch Video here)

Along with fans, celebs are also reacting fiercely to this video of Kim Sharma. Kim’s ex-boyfriend and former cricketer Yuvraj Singh has also liked his video. Thousands of views have come on this video of Kim. In the past too, the actress shared a video of pole dance, on which Yuvraj Singh commented. Kim Sharma made headlines with the film ‘Mohabbatein’.

Kim Sharma does not have any big Bollywood project at the moment, but the personal life of the actress is definitely causing a lot of gossip. A few days ago a video of Kim Sharma went viral in which Kim was seen with tennis player Leander Paes. Photos of the restaurant Kim and Leander had eaten in Goa were also leaked. Kim Sharma was last seen on the silver screen in the year 2010.