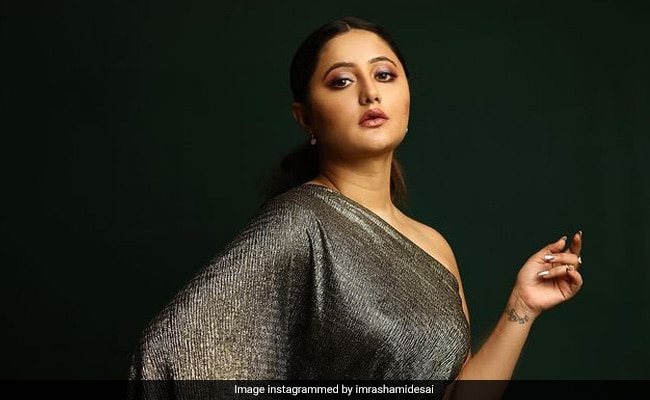 As much as her fans like Rashmi Desai, a well-known actress of the television industry, for her performance, equally love is spent on her beautiful acts. Rashmi often wins the hearts of fans with her stunning and glamorous photos. Be it his tremendous bonding with Devoleena in Bigg Boss house or the controversy of his personal life, everyone has been very much liked by the fans. After coming out of Bigg Boss house, Rashmi’s fans are flooded on social media. This is the reason that to stay connected with her fans, she keeps sharing her beautiful and ravishing pictures on social media.

Once again Rashmi Desai has increased the temperature of social media by sharing her latest pictures on Instagram. Rashmi Desai has shared her latest photoshoot with fans. Rashmi is looking very hot and sizzling in this photoshoot. His killing poses are worth seeing in the pictures. In these pictures, the actress is seen wearing a short shirt dress of shimmer gray color. Rashmi is wreaking havoc in this dress. The tied hair, earrings and a very unique ring complement her look. Rashmi’s smokey eye makeup also looks perfect.

Many fans have praised her beauty on Rashmi Desai’s post, but in her comment box, fans have also asked questions related to Siddharth and Shahnaz. One of his fans has commented and wrote, ‘Share some things about Ma’am Sid, while the other fan has tried to know the condition of Shahnaz. Actually, in Bigg Boss 13, Rashmi Desai was also present in the house along with Siddharth and Shahnaz and on the death of Siddharth, Rashmi was seen standing with her family in the hour of grief.