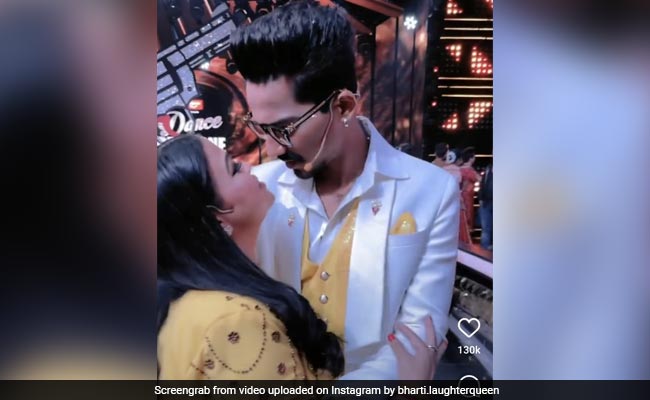 Bharti Singh was seen in a romantic style with husband Harsh

Television’s laughter queen Bharti Singh is not only famous for comedy, but now she also dominates due to her dance. The tuning of Bharti and her husband is amazing. Fans like the nokjhok of both. Both are often seen having fun on the sets of dance reality show ‘Dance Deewane 4’. Both of them are hosting this show together. Bharti maintains her presence on social media with her funny and comic videos. A new video of Bharti dancing with her husband is being seen a lot.

Harsh and Bharti are in a romantic mood

In this funny video, Bharti (Bharti Singh Video) is doing a stylish walk and Harsh is following her. Then both walk with their arms in their arms and give romantic poses. When Harsh goes after Bharti, Bharti points towards the camera with her thumb and tells how she is making Harsh walk behind her. Bharti-Harsh is giving a romantic pose on the song ‘Kitthe Chali A..’ in the video. In this video, fans are very fond of Bharti-Harsh pair. Commenting on this post in Instagram, if a fan wrote the cutest for him, then someone is telling him his favorite. One user wrote in the comment, love you both, Bharti you are looking freaking osm, bless you my love. At the same time, another user wrote Bharti Di and Harsh Tussi Great Ho Ji.

Bharti-Harsh pair formed due to comedy

The love between Bharti Singh and Harsh did not see the age limit, so Bharti married Harsh, three years younger, in 2017. Both had a destination wedding in Goa itself. Before getting married, Bharti and Harsh were in touch with each other for almost 7 years. Bharti and Harsh first became friends and the friendship soon turned into love. Comedy made a pair of these two and then together became sure, Bharti had met Harsh on the set of the show Comedy Circus.